Hope and courage in the climate crisis 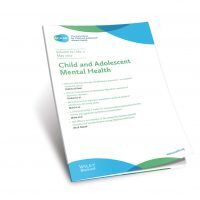 Celebrating the launch of the CAMH Special Issue on ‘Child and youth mental health & the global ecological crisis’ (due to be published in January 2022), we’ll be discussing the mental health implications of climate change with leading mental health professionals. This event is coming live from Australia (8pm EDST) and the UK (9am).

The Editors of this Special Issue Professor Bernadka Dubicka, Professor Ann Sanson, Professor John Wiseman, the author of the recently published book “Hope and Courage in the Climate Crisis: Wisdom and Action in the Long Emergency”. He will discuss the mental health challenges of facing the reality of the climate crisis, and what we can learn from philosophers, faith leaders and environmental activists/heroes to help us to sustain our efforts to mitigate the crisis, with hope and courage. We are also delighted to be joined by three young people to give key perspectives Rhiannon Hawkins,  Kirsten Hoffman, and Nathan Randles.

This will be followed by a Q&A session and discussion.

Sign up to this free event at this link or on the Book Now button at the top of the screen and complete the form that follows. You’ll then receive an email confirmation and a link to the webinar, plus we’ll send you a calendar reminder nearer the time. ACAMH Members attending will be eligible for an electronic CPD certificate. Non-members can opt to receive an electronic CPD certificate for just £5, simply select this option at point of booking.

Where to find courage and defiant hope when our fragile, dewdrop world seems beyond saving – Prof John Wiseman’s from The Conversation

Dr. Laelia Benoit’s 17-min podcast on ‘The Anxiety and Grief of the Ecological Crisis’

The Royal College of Physiatrists ‘Eco distress: for young people’

The Royal College of Physiatrists position on sustainability

Maria Ojala Commentary: Climate change worry among adolescents—on the importance of going beyond the constructive–unconstructive dichotomy to explore coping efforts—a commentary on Sciberras and Fernando (2021)

Professor Bernadka Dubicka is a Consultant Psychiatrist at Pennine Care NHS Foundation Trust, Honorary Professor at the University of Manchester, and Editor-in-Chief of the journal Child and Adolescent Mental Health. She is the former Chair of the Royal College of Psychiatrists (RCPsych) Child and Adolescent Faculty, where she played a leading role in developing the eco-CAMHS group; contributed to the RCPsych position statement on the ecological crisis; and has commissioned a special issue of CAMH on the ecological crisis (Feb 2022) with invited editor, Dr Ann Sanson. She attended COP26 in Glasgow as an RCPsych observer.

Professor Ann Sanson is a developmental psychologist whose research has principally focused on social and emotional development from infancy to adulthood. She has been a principal investigator on major Australian longitudinal studies for over 30 years. She has also had an ongoing engagement with the contributions of psychology to social issues: e.g. as the Australian Psychological Society’s inaugural Director of Social Issues. Her current work focuses on the impact of the climate crisis on current and future generations of children. She is an Honorary Professorial Fellow at the University of Melbourne, and a Fellow of the Australian Psychological Society and the International Society for the Study of Behavioural Development. She has over 200 publications.

Professor John Wiseman is a Senior Research Fellow with Melbourne Climate Futures and Melbourne Sustainable Society Institute ; and an Adjunct Professor at the Melbourne School of Population and Global Health at the University of Melbourne. His other current roles include Visiting Fellow,  Centre for Climate Economics and Policy, Australian National University; Research Fellow at the Centre for Policy Development and Board member of The Next Economy.

John’s major research and policy contributions have been in the fields of social justice and citizen engagement; globalisation impacts; social wellbeing policy frameworks and indicators; sustainability transitions; and climate change risks and solutions. His current work focuses on the actions needed to accelerate the transition to a just and resilient post-carbon society.

His most recent book is Hope and Courage in the Climate Crisis, Wisdom and Action in the Long Emergency, Palgrave Macmillan, 2021.

Kirsten is a climate activist and law student at the Australian National University in Canberra. She joined Extinction Rebellion in June 2021, right when climate activists Violet Coco, Eric “Sergeio” Herbert, Andrew George, Mark Conroy and Sasha Steindl arrived in Canberra, Australia’s political epicentre. Kirsten was a legal observer during the August Barry Drive Blockade against the Australian Petroleum Production and Exploration Company, and the graffiti of the Department of Agriculture, Water and Environment, protesting the Environmental Minister’s appeal of Sharma v Minister for Environment. In October Kirsten was arrested five times in Extinction Rebellion protests and spent three nights in the ACT watch house, the last for blockading Commonwealth Avenue bridge on top of a truck. In November Kirsten joined the Blockade Australia mobilisation and pressed a stop button in the world’s largest coal port in Newcastle, Australia

Rhiannon is a young person representative for the Royal College of Psychiatrists, a trustee at the Green Economics Institute and currently studies Geography at the University of Oxford. She has been involved in a variety of different Royal College eco distress projects, for example: planning conferences, doing press interviews and contributed to the College’s climate position statement. She has also written a debate piece within the ACAMH within their special COP26 issue. Rhiannon has also been a part of the Green Economics Institute’s delegation to COP26 and helps write magazine and book contributions for the Institute. She has strong interests in Climate Change, eco distress and intersectionality.