Anxiety is often treated using interventions that target interpretation bias, but the link between interpretation bias and anxiety in children is unclear. Now, in a Research Review published in the Journal of Child Psychology and Psychiatry, Suzannah Stuijfzand and colleagues have performed a meta-analysis of the literature to establish whether this association in children really does exist.

Anxiety disorders affect ~6.5% children worldwide, and can have negative consequences on a child’s family, school and social life. Furthermore, associations have been reported between childhood anxiety and suicidal ideation and depression later in life. Cognitive models of anxiety centre on threat-related schemas that underlie an individual’s emotional, behavioural and cognitive state.  These schemas are activated and guide cognitive processing in response to real or potential threats. A maladaptive threat schema results in negative cognitive bias, whereby affected individuals selectively process, attend and interpret threat-relevant information1.

Through their analyses, the researchers found a robust, moderate association between interpretation bias and anxiety in children and adolescents. When considering the population variables, they found that this association was only moderated by age, whereby older children and adolescents showed a stronger association between negative interpretation and anxiety than younger children. “I think we were surprised by how robust the overall effect size was”, describes Stuijfzand. “The literature appeared very inconsistent so we had suspected the effect size would be small, but it was actually quite convincing”. For the procedural variables, content specificity was the only significant moderator of the association: when the scenario content matched the anxiety subtype, the association between negative interpretation and anxiety was larger than when they did not match.

The researchers hypothesised that developmental factors (such as the ability to inhibit attention to threat) and regulatory control may underlie the age effects on the negative interpretation bias–anxiety axis in children and adolescents. In their analyses, the researchers used age as a proxy for development as only a few studies have directly investigated the influence of specific developmental factors on this association. According to the researchers, future work should, therefore, ensure that developmental factors are assessed alongside interpretation bias and anxiety. They also considered that their findings may actually reflect differences in task performance rather than information processing. Because younger children may have difficulties in understanding and completing the task as intended, Stuijfzand and colleagues propose that future interpretation bias tasks be designed in a developmentally sensitive way.

The researchers outlined two further questions that remain unanswered following their review. First, as the moderation effect by content specificity was mainly driven by social versus non social scenarios, it remains unclear whether this effect extends across anxiety subtypes. Second, it is unknown whether the relationship between interpretation bias and anxiety exists amongst young children, as very few studies have been conducted in those younger than 8 years-of-age. 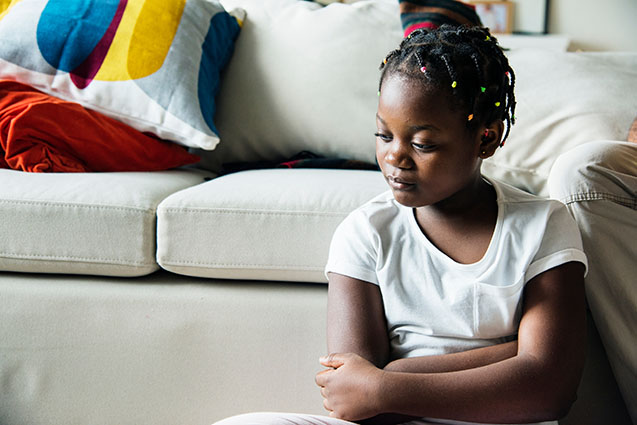 To address this second question, the researchers have been developing child-friendly tasks that measure both attention and interpretation bias in young children but are minimally dependent on motor and linguistic development. “These tasks have shown promise in being developmentally appropriate and have enabled us to look at the nuances of the association between the biases and anxiety in young children”, says Stuijfzand. “While we work on submitting the papers outlining these tasks, Professor Helen Dodd is also working on a longitudinal study that is examining whether cognitive biases predict anxiety when children start school”.

Going forward, Stuijfzand and colleagues hope that the field will move from examining associations between cognitive processes and child anxiety toward gaining a clear idea as to which cognitive components need to be targeted to produce an effective treatment strategy. “What are the ‘active ingredients’ of the treatments that we use for child anxiety? Does interpretation bias, for example, need to be modified to see benefits in anxiety?”, queries Stuijfzand. “By identifying the active ingredients we may be able to provide more targeted interventions”.

In summary, Stuijfzand and colleagues found a medium-sized overall association between negative interpretation bias and anxiety in children and adolescents. This effect was robust across the clinical and community samples analyzed. Although they detected marked heterogeneity across studies, this heterogeneity could be accounted for, in part, by age and whether the content of the interpretation task matched the specific anxiety subtype being assessed. Their findings are in line with a previous review by Dudeney et al., who reported age effects on attention bias and anxiety in children4. “Significant advances in our understanding of the role of cognitive biases in developmental pathways to child anxiety are now required”, says Stuijfzand. “We need to see an active drive towards designing prevention and early intervention programs that really work”.

The research data are consistent with NICE guidelines that recommend CBT to treat anxiety disorders in children and adolescents. CBT targets negative interpretations, which the study data show are clearly linked to anxiety. The fact that the findings were stronger in older rather than younger children may indicate that treatments need to have a different emphasis across childhood development. Bettering our understanding of the key mechanisms that maintain anxiety disorders at different points in development will help inform more targeted, developmentally-appropriate treatments to increase their effectiveness and efficiency in children