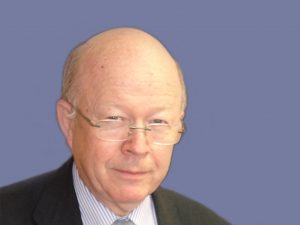 I’m Eric Taylor, Emeritus Professor of Child and Adolescent Psychiatry here at The Institute of Psychiatry at King’s College Hospital, and I think still an honorary consultant at the Maudsley Hospital, though not seeing patients currently. I am in my eighth decade.

How did you become interested in children with attentional difficulties?

I’d always wanted, for a long time, to get into the practice and science of mental health. As an undergraduate I had the great opportunity to be supervised by the great Lawrence Weiskrantz who was working on attention.

At the time, failures of attention were thought of as a major cause of problems – including schizophrenia. I won a travelling scholarship to Harvard and went over there to work with Leon Eisenberg and Keith Connors. At that time they were exploring what were the interesting growing points: how neuropsychology, and changes to it, creates mental health changes. So I had a very happy couple of years there and returned to the Maudsley to train.

How has your personal definition of ADHD shifted since then?

Probably not enough, I still think of it as a set of neuropsychological changes with multiple causes, which was the way I thought of it then. At the time, at Harvard, I certainly thought of it as a fairly easy problem to crack – that we’d work out what sort of problem it was, that we’d find ways of training it – end of story. But in practice that’s proved extraordinarily difficult because it’s a much harder problem than it seems.

And of course, things have appeared that I would never have dreamed of. The idea that you can measure genes would’ve seemed like science fiction and the idea that you could look at the workings of the brain with the techniques we have now – that would have seemed visionary.

Do you think perceptions of ADHD have changed over your career?

In this country, greatly. When I was starting nobody wanted to know, it was anathema. It was a sign that you were a brutal, heartless scientist without an interest in people. I remember being shouted down at meetings of the Royal College of Psychiatrists. Now, of course, it’s an entirely different story.

Why would you be shouted down?

Medication.  It’s not a core part but it’s an important part of it. If you look at the history of ADHD, it’s partly grown up in this form because it’s what Ritalin treats. We never spoke about attentional problems in the profession until the 1930s. It was then that the man who discovered the effect of Benzedrine on children found that it altered learning and behaviour and made children more relaxed. Then as the years went on and measurement improved people realised that the core of it was attention and impulsivity.

Do you think research and treatment of ADHD have been hampered by an implicit ‘blame the parents’ attitude?

Yes, I think there’s still a strong tendency to blame parents, and when you’re talking with teachers, there’s still a strong tendency to think ‘it’s not the child, it’s the family’. Of course, being an inherited disorder, it quite often is, but there are many, many reasons for it – it’s not just that the parents don’t know how to bring up children. But that attitude still persists and part of the resistance to the idea of ADHD is the belief that parents are trying to excuse themselves for their own failings, which is a nasty twist for the parents.

Do you think digital technology is reducing attention spans?

I think the evidence is against it on the whole. I’d cite particularly the genetic evidence which is that people differ in attention span partly because of genes and partly due to environment. But the environment is not the things that affect all children in the family – they’re the things that affect one child rather than another. And that, I think, argues against it, because exposure to digital media and so on is pretty much the shared environment.

Do you think cultural changes – such as the prevalence of more academic education paths over manual apprenticeships have made it harder to live with ADHD in our society?

Yes, but it’s swings and roundabouts. There are plenty of niches in our society which are very good for impulsive people who work well on the spur of the moment: sales, the performing arts, sport. It’s a society with more niches than there used to be and I think in the past education was really only academic education – the grammar schools, the universities – and only a minority where there. Because ADHD cut you off from that kind of route, it cut off a lot of very able people from the kind of things at which they could really excel. I think if anything it’s probably a bit easier now, but the problems are still there.

Have you met people with ADHD who’re grateful for the traits of the disorder?

Yes, I think so, usually with fairly mild ADHD. I think the classic instance is probably Rory Bremner. His film with the BBC sees him taking medication for a while and then his comedy gigs before and after – because he’s worried that if he did take it, he’d lose some of the spontaneity. I don’t think he would, personally. But he’d be a person who’s happy with the disorder.

Then there are some very adventurous people: stuntmen, daredevils, gamblers – who’re glad they’ve got the kind of personality and temperament that thrives on excitement and interest.

But it’s a minority. What most adults with ADHD say is ‘I’m always in trouble and I don’t know why’, ‘I’m isolated socially’ or ‘I’ve never met my potential in life’.

Does treating children with ADHD whose parents also have the disorder present unique challenges to treatment?

Yes, I think it does. It has benefits and disadvantages. A benefit is that parents that have it themselves are often quite understanding about it – especially mothers – who are quite warm towards their children. This is protective, and makes the children much less likely to get into anti-social behaviour. On the other hand, they’re terrible to try and teach behavioural modification to because they can’t ignore things, they can’t not react. So you have to find different ways of teaching. It’s a challenge, but it’s not a disaster.

The drugs we use to treat ADHD are pretty good compared to those for other disorders, aren’t they?

Yes they are pretty good. They do a good job, not for everyone of course and not usually a total job. In particular I think there’s a limitation in the long term because the evidence is pretty good up to periods of 2 or 3 years on medication. Beyond that point, there’s not a lot of evidence and I think the effect tends to wane. I think that if prescribers paid more attention to the details of prescribing I think they would probably work for longer.

Do you worry about the addictive potential of stimulants like methylphenidate (Ritalin)?

Yes, I do worry a bit. The ones we prescribe are not addictive. Anything taken by mouth doesn’t act quick enough to be addictive, even cocaine taken by mouth is pretty rubbish, from the point of view of getting high. You have to sniff it or inject it. If you do sniff amphetamine or inject amphetamine it’s terribly addictive. I do worry about it and I worry about the quite extensive misuse of it, not for recreational purposes, but by students at elite universities who want to improve their performance – which personally I see as cheating.

Can the disorder be beneficial, or adaptive in an evolutionary sense?

Yes, I published on that with a very bright PhD student called Jonathan Williams. His idea, which we published, is the matter of group selection. There’s not an advantage to the individual, but it’s an advantage to the group to have a few people with ADHD in it, because they’re the innovators, they’re the explorers. There’s more of the 7 repeat variant of the D4 gene in populations of humanity that have migrated furthest from our African origin. So as you go round the world there’s a very high rate, not of ADHD, but of one of the genes involved. So maybe they’re the people who find out the red berries are poisonous – it’s no help to them, but it helps the tribe.

What are your hopes for the future of ADHD and those affected by it?

I’d say what the children say, which is that they want better understanding. I’d want the understanding to spread: that it’s not their fault; that it’s a difference, not a defect; that there can be positive things about it; and that if parents and schools understand it really well they can help the children to find their niche in life.

Well said, great respect for Prof Taylor after listening to him at UCD Master Class on Friday.
There are other great examples of professionals and ordinary people with ADHD disorder helping to dispel the myths and provide hope to all of us in the ‘ADHD Tribe’, like Jessica McCabe.
Thank you, Patrick Turk
Dublin

I have the pleasure to meet Dr Eric and what a pleasure !!!.
I find him so easy to talk and to understand and is so refreshing to any conference or talk where he is present.
Thank you for all your work , your knowledge and of course to share it with us parents.

Thanks for this perspective and discussion.

@acamh about 6 minutes ago Around 1.25 million people in the UK suffer from #eatingdisorders. Early diagnosis, intervention and treatment is c… https://t.co/YXXUsTx1Ki