In 2015, Kristen Culbert, Sarah Racine and Kelly Klump compiled a Research Review on the underlying causes of eating disorders for the Journal of Child Psychology and Psychiatry. Their review identified variables that can be considered risk factors for eating pathologies and the critical areas for future research. Here, the researchers revisit their key findings and discuss how the field needs to progress in future years.

Eating disorders are severe psychiatric illnesses with an estimated lifetime prevalence of ~2.8-6.4% in US adolescents. Three primary categories of eating disorder have been recognized by the DSM-5: anorexia nervosa, bulimia nervosa and binge eating disorder. In addition, ~20-40% cases of eating pathology fall into “Other Specified or Unspecified Feeding or Eating Disorders” categories. Despite diagnostic distinctions between these categories, all are associated with negative medical, cognitive, emotional and social outcomes. As such, increasing our understanding of the factors that contribute to the development of an eating pathology is necessary for early intervention and prevention

In their review, Culbert and colleagues reinforce that no single factor accounts for the development of an eating disorder. “Risk for eating disorders involves a complex interplay between sociocultural, psychological and biological influences, but most research has examined biological and psychosocial risk factors in isolation”, explains Culbert. “Studies that examine factors across all domains are critical to fully determine the causes that contribute to the development of an eating disorder. Consequently, our review aimed to identify key risk factors that had been studied using integrative methods — i.e. approaches that captured both biological and environmental influences (e.g., twin studies) and/or various levels of analysis, like the combination of biological and behavioral data (e.g., imaging analyses during cognitive testing)”.

The authors describe that over the course of the 20th century, the level by which women living in Western societies idealize being thin and the incidence of anorexia nervosa and bulimia nervosa has increased. Westernized cultures offer ample opportunity and exposure to pressures to obtain the “thin ideal”, which is considered to increase risk of developing an eating disorder in females. This effect has been exemplified in the case of bulimia nervosa: increased rates of bulimia (which also has a strong genetic element) have been observed in non-Western cultures following exposure to Western influences, such as Western television programs.

Culbert et al. identified that media exposure, perceived pressure to be thin, thin-ideal internalization, and an expectancy to gain life improvements from thinness can prospectively predict increased levels of disordered eating in adolescents and young adult women. As such, they claim that interventions that (i) reduce the extent to which an individual internalizes the thin-ideal as being important and (ii) that alter expectations that life will improve if thinness is achieved, have the potential to reduce the risk of developing disordered eating. One such intervention is the “Body Project” — a body acceptance program that uses a cognitive dissonance technique to help school-aged girls and young women resist cultural pressures to pursue an unrealistic body image. Interestingly, the Body Project technique has been shown to alter neural responsiveness to thin-ideal media images and statements, thus highlighting the interplay between cognitive and behavioural processes that underlie biological change.

The predominant biological risk factors identified thus far for eating disorders are genetic risk factors and ovarian hormone levels. Although the specific genes that contribute to eating disorder risk remain largely unknown, behavioural–genetic data consistently highlight a substantial genetic and environmental contribution to risk for an eating disorder during adolescence and adulthood. For example, twin and adoption studies indicate that at least 50% of the variation in risk for an eating disorder observed between individuals is due to genetic differences. Psychological, environmental factors and in girls, pubertal maturation, can all interact with genetic risk factors to further influence the risk of developing pathological eating attitudes and behaviors.

In adulthood, changes in oestradiol and progesterone during the menstrual cycle can influence risk for binge eating symptoms in women. Work from Klump et al. has also implicated a potential role for oestradiol in the pubertal emergence of genetic effects on binge eating in girls. Their latest data, which will be published in the Journal of Abnormal Psychology, showed that genetic influences on binge eating were stronger in girls that had lower levels of oestradiol during puberty. “Notably, these findings fit with effects observed in adult women, whereby lower levels of oestradiol are risky for binge eating”, explains Culbert.

Finally, the researchers report that disturbances to the levels and/or function of serotonin and dopamine have been consistently associated with eating disorders. In particular, higher levels of serotonin metabolites and lower levels of dopamine metabolites have been found in the cerebral spinal fluid of patients who have recovered from anorexia nervosa. These findings may reflect increased serotonergic and decreased dopaminergic neuronal activity in these patients. Unfortunately, the use of correlation-based methodological designs has made it difficult to discern whether neural and physiological alterations in these neurotransmitters truly reflect predisposing risk factors for eating disorders or are merely correlative. 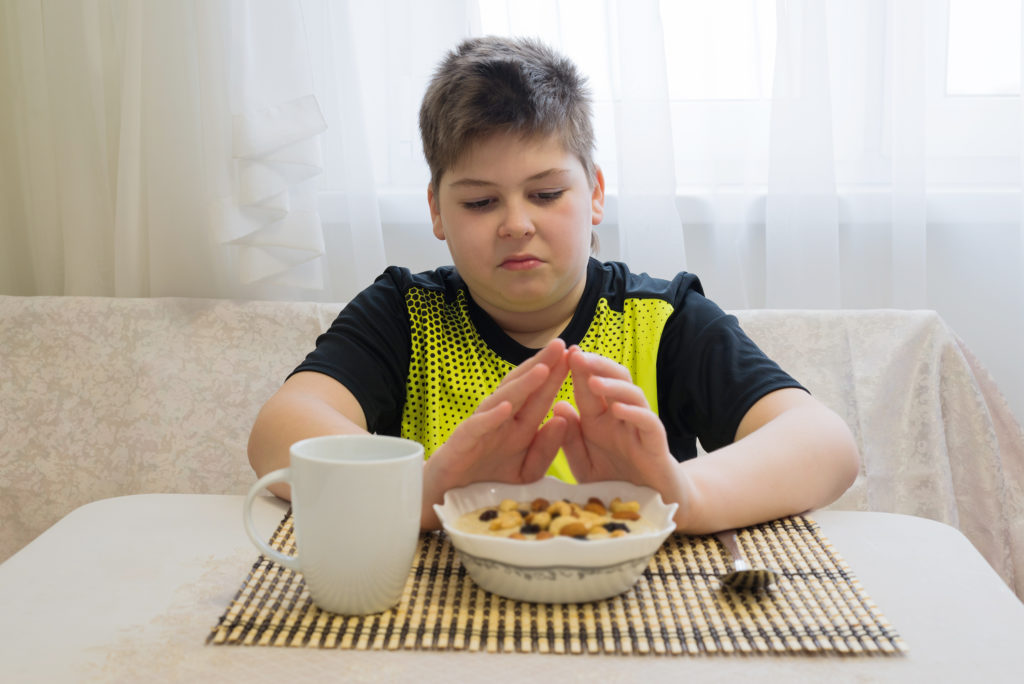 The authors discuss that the most striking epidemiological feature of eating disorders is the marked sex difference in prevalence — females substantially outnumber males in the prevalence of eating disorders (ranging from 2:1 to 10:1, across diagnoses). In addition, they note that the level of risk varies over the course of childhood development. “Despite the wide recognition of these epidemiological features, it was startling to find that most studies have exclusively focused on examining risk factors and correlates of eating pathology in females during late adolescence or young adulthood”, explains Culbert. “Very few studies have taken a developmental or lifespan perspective and few have aimed to elucidate sex differences versus similarities: clearly more research is needed to address these critical gaps in knowledge!”

Indeed, recent work from Culbert and colleagues has started to address this gap, with data published in the Journal of Abnormal Psychology suggesting that genetic risk factors for eating pathology may emerge earlier in boys than in girls. “In contrast to the mid-pubertal genetic activation that is consistently found in girls, genetic risk factors for eating pathology in boys become prominent during middle childhood and early puberty”, describes Culbert. “Replication is needed, but these initial findings further suggest that at least some of the factors underlying risk for eating pathology in boys and girls differ”.

Culbert et al. conclude that to fully illuminate the causes of eating disorders, it will be necessary for researchers to continue to examine risk variables across multiple domains and to consider how various risk factors intersect. They propose that examining developmental trajectories of symptom expression and understanding which factors do or do not predict eating pathology in males, children, and older adults will be critical for (i) accurately identifying causal processes, (ii) pinpointing unique mechanisms that place female adolescents at greatest risk, and (iii) translating knowledge of risk into prevention and intervention efforts.

“We would also be remiss not to acknowledge that most prior studies have been conducted on European or European American women; existing data indicate that eating disorders affect individuals of all racial and ethnic backgrounds around the globe”, notes Culbert. “Examining whether cultural components, such as acculturative processes, intersect with other risk factors and/or uniquely contribute to differences in risk for eating pathology among ethnic minority individuals will be important to explore. For this reason, this topic is a current focus of a doctoral student in my lab”.

Over the next 10 years, the researchers anticipate that scientific advancements will help clarify biological vulnerability for eating pathology and that there will also be increasing efforts aimed at exploring transactional risk processes among sociocultural, psychological and biological factors in males and females across developmental stages. They hope that findings from such research will “identify novel preventative strategies and treatment targets that will ultimately lead to a personalized medicine approach to enhance intervention effectiveness and long-term health outcomes.”

*Anorexia nervosa (AN): a disorder characterized by deliberate weight loss, induced and sustained by the patient. The disorder is associated with a specific psychopathology whereby a dread of fatness and flabbiness of body contour persists as an intrusive overvalued idea, and the patients impose a low weight threshold on themselves. There is usually undernutrition of varying severity with secondary endocrine and metabolic changes and disturbances of bodily function. The symptoms include restricted dietary choice, excessive exercise, induced vomiting and purgation, and use of appetite suppressants and diuretic.

Binge eating disorder (BED): an eating disorder in which affected patients regularly eat an excessive amount of food over a short period of time and feel unable to stop during the eating episode; patients then typically experience feelings of upset and guilt

*Bulimia nervosa (BN): a syndrome characterized by repeated bouts of overeating and an excessive preoccupation with the control of body weight, leading to a pattern of overeating followed by vomiting or use of purgatives. This disorder shares many psychological features with anorexia nervosa, including an overconcern with body shape and weight. Repeated vomiting is likely to give rise to disturbances of body electrolytes and physical complications. There is often, but not always, a history of an earlier episode of anorexia nervosa, the interval ranging from a few months to several years.

Cognitive dissonance: producing inconsistent or conflicting thoughts or attitudes to produce a feeling or discomfort and ultimately lead to an alteration of beliefs

Disordered eating: abnormal eating habits that although are similar in presentation to diagnosed eating disorders, do not warrant diagnosis usually due to the level of severity of frequency of the behaviour

Lifetime prevalence: the proportion of the population that at some point in their life time will experience a particular condition

Perfectionism: a personality trait by which an individual strives for flawlessness, and has high standards accompanied by critical self-evaluation

Thin ideal: the concept of the ideally slim body, commonly a slender figure with a small waist and little body fat

Thin ideal internalization: the degree by which individuals ‘buy into’ the importance of achieving the thin ideal